My creative self sprouted at age 4.  Here is my first picture: a steam shovel.  As you can see, this drawing consists of a continuous line depicting a mechanical beast. 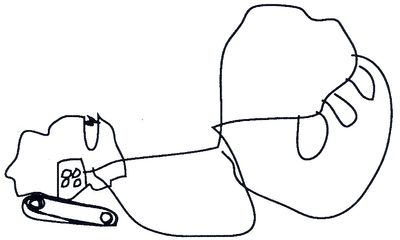 I drew this picture after visiting a construction site and reading the book, "Mike Mulligan and The Steam Shovel". Soon after, I was compelled and encouraged to paint the characters from the book "Where The Wild Things Are" on my bedroom walls so I could live in the imaginary world of this story. Thus began my fascination with mechanical objects and beasts.

I grew up in a filmic family in which many movies and movie makers (especially special effects driven ones), became  very influential to my professional growth.  King Kong (Willis H. O'Brien), Mighty Joe Young, The Seventh Voyage Of Sinbad and Jason and The Argonauts (Ray Harryhausen) showed me how beasts can come to life through stop motion animation.  Dracula, Frankenstein, The Mummy, The Wolfman, (Jack P. Pierce), Planet of the Apes (John Chambers), Little Big Man, The God Father, The Exorcist (Dick Smith), The Autobiography of Miss Jane Pittman, King Kong (Dino’s remake) and An American Werewolf In London, (Rick Baker) were examples of movies that transformed actors/actresses into creatures through special make-up effects. All of these movies and very talented people showed me that traditional art forms ( ie sculpting and painting) can come to life.

In 1976, at the age of 16, I remember being on the lot at 20th Century Fox in a Studio Theater and having the unique opportunity to attend the cast and crew screening for Star Wars.  It was such a moving experience!  I knew that right then and there that I was going to pursue a career as a Special Effects Artist focusing on  photographic and make-up effects.

After seeing “Jurassic Park” and realizing that stop motion animation was becoming obsolete, I knew computers andnew software tools were my future. I expanded my knowledge and learned new programs including Alias, Wavefront, SoftImage, Maya and Photoshop. Learning all of this software opened the door to new special effects techniques and finally, a new industry: Video Games.

In 2000, EA Sports in Florida hired me to work on Madden Football 2001 and NASCAR Thunder 2002 and 2003.  My filmic background and attention to artistic detail pushed all of these titles forward into a new photo hyper-realistic visual style.  The games convincingly looked like real television broadcasts!  Additionally, beyond the broadcast look, I motivated the programmers to introduce motion blur to the NASCAR Thunder game in order to achieve a real sense of speed.

In 2004, I became aware of the need for better visuals in the training and simulation industry. Better graphics and better immersion equals better training. All of my experience in creating realistic synthetic environments led me to SDS International and CAE, USA where I currently work.

Summer of Love: Reflections on Pulse

A night of tragedy inspired a new exhibit, “Summer of Love: Reflections on Pulse” which opens at the Albin Polasek Museum & Sculpture Gardens on May 9 and runs through September 3, 2017. The museum is proud to host this exhibition, the result of an open call to artists to comment on the one-year anniversary of the Pulse nightclub shooting and the idea of love transcending hate. The response to the artists’ call proved tangibly that the world was moved by this horrific event and by the remarkable way Orlando responded with an outpouring of unity and an emphasis on inclusivity. Accepted artwork comes from many local artists but also includes pieces from outside of Florida and the United States. The pieces selected are incredibly diverse in medium and subject matter.

The Albin Polasek Museum & Sculp­ture Gar­dens is now accept­ing sub­mis­sions for the 2015 – 2016 Exhi­bi­tion “Sight Unseen: Touch­able Sculp­ture” Sight Unseen is a sculp­ture exhibit based around the con­cept of touch­able, hands-on, 3-Dimensional art. Local phys­i­cally chal­lenged com­mu­ni­ties and orga­ni­za­tions will be invited to par­tic­i­pate, includ­ing the blind and vision-impaired. Blind­folds will be avail­able for vis­i­tors to use to expe­ri­ence your art with height­ened sen­sory aware­ness.